Mei (めい (冥), Mei) is a villager of Kardia. Mysterious, a strong warrior and reoccurring traveler, Mei resides in Lady Ann's Inn in the first room to the left, located in the first section of town. She usually prefers to remain solitary, and as such, doesn't associate with many of the villagers. Her hometown was apparently destroyed by Chimera, and her family is unknown.

Although her appearance leads people to believe that she's young, Mei is a lot older than she appears; telling others to be polite to their elders and behaving in a formal manner. She's set in her beliefs, and is open to battling anyone who says otherwise. Though deep down her hard exterior, there is a kind girl who likes to smile.

Raguna meets Mei by talking to her for the first time in anyone of her locations. 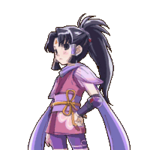 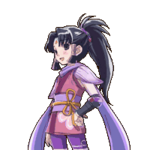 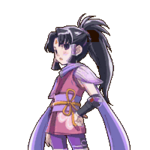 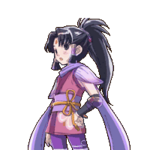 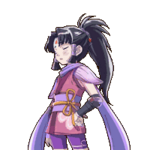 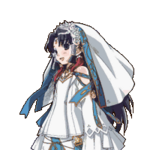 To marry Mei, Raguna must raise her to 10 Love and Friendship Points. Talking to Mei every day will raise her points, but giving her Fried Riceballs or fish will raise her points faster. For her proposal gift, it is necessary to have an acquaintance who also owns a copy of Rune Factory. Firstly, upgrade Raguna's fishing pole to level 5, the Sacred Rod. Once it's Winter, enter the Misty Bloom Cave and fish to the highest charged power in the boss room where Siren was fought, or the room with the machine that summons Tricky Mush, until a Lover Snapper is caught. Next, using the Wi-Fi Network, trade the Lover Snapper back and forth until it reaches at least level 80 (It will level up by 1 during each trade). Once this is done, gift the level 80+ Lover Snapper to Mei then speak to her again to propose. Mei will cook Raguna Fried Riceballs every morning after marriage.

On a Festival Day, Mei will be celebrating____(Not everything in schedule may be correct so far). She's usually in her room at the inn until 9AM. On most days, she can be found near the entrance to Clemmens cave. On Thursdays, she hangs out at the pier on the beach, and on Tuesday nights (9PM) she goes to the pub. If it's rainy, she'll probably stay in the inn.

Retrieved from "https://ranchstory.miraheze.org/w/index.php?title=Mei_(Rune_Factory_1)&oldid=33023"
Categories:
Cookies help us deliver our services. By using our services, you agree to our use of cookies.