Kurt (Harvest Moon: Save the Homeland)

One of Woody's woodworking apprentices. He works alongside his brother, Joe, at the carpentry. He's a man of few words, and can come off as confrontational. Deep down, he's just shy and has well-meaning intentions. He has a crush on Dia.

After befriending Kurt, Lyla, and Parsley, speaking to Kurt will trigger a cutscene which sets you on the Azure Swallowtail Path. Kurt explains how a rare species of butterfly, the Azure Swallowtail, used to live in the Valley long ago. If the butterfly was found in the Valley again, then maybe, just maybe, the Valley could be saved from theme park construction. After listening to Kurt, have a talk with Woody, who was the last person to see the butterfly in the Valley. The Goddess appears and suggests speaking to people who know more about plants, so befriend Lyla and Parsley to proceed. If you speak to Woody he'll explain how the butterfly would come when Blue Mist Flowers bloomed. Lyla and Parsley will look into information about Blue Mist Flower and will inform you of new information once you increase their friendship further. As you receive updates from Lyla and Parsley, stop by Louis' Tool Shop to view a cutscene. Louis has created a camera that will document the butterfly's appearance. Lyla and Parsley's research results in the discovery of Blue Mist Flower seeds. They're given to you in the hopes that you can nurture them into a blooming flower. Take the seeds to the Harvest Goddess' Forest and plant them in the soil tile. Be sure to water the plant every day until the flower blooms, at which point Parsley offers his congratulations. The next cutscene comes after checking on the plant for 3 days -- you, Lyla, and Louis are able to see the Azure Swallowtail in person! Louis takes a picture of the butterfly before it flies away, and rushes off to get it sent to wildlife authorities. Finally, the ending cutscene: Lyla is preserving the seeds of the Blue Mist Flower before it withers, so the plant can be grown and repopulated in the Valley. Louis stops by and tells you both that the image of the elusive butterfly has been published and Sugar Valley is declared a wildlife preserve! 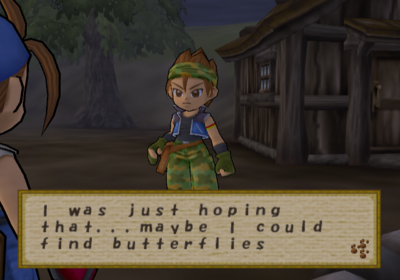 About the Swallowtail - Devising a Plan

Retrieved from "https://ranchstory.miraheze.org/w/index.php?title=Kurt_(Harvest_Moon:_Save_the_Homeland)&oldid=32053"
Categories:
Cookies help us deliver our services. By using our services, you agree to our use of cookies.