Heartflame Island is a heart-shaped island located somewhere in the Southern Hemisphere. The island houses a number of residents, including the people of Volcano Town. Most of the human inhabitants rely on Automation instead of communication with nature. Because of this, the Spirits of the island have sealed the island. The very land itself is rebelling, with Heartflame Volcano set to blow any time now. Heartflame Island features many mysterious locations, with lots of secrets to uncover.

If you are looking for specific pathway maps, you will find them on the Caverns and Dungeons page. 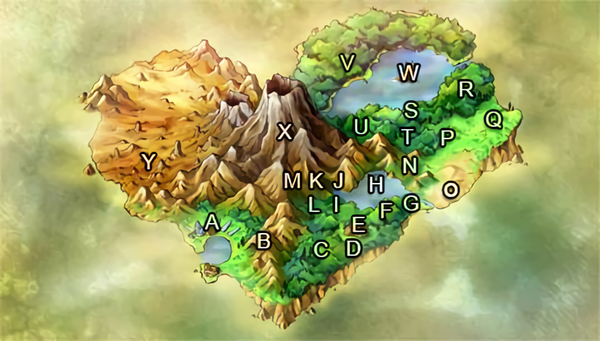 Volcano Town is a seaside port town where most of the island's inhabitants live. Volcano Town's mayor is Chuck Gremley.
For more details about specific places in Volcano Town, please refer to the Volcano Town page.
A Moonlight-original art project can be found here.

A cave tunnel connecting Volcano Town to the south end of the island. It's the fastest way to travel to Volcano Town from the Easter Ruins. Inside the Pass is a Sealed Door; unlocking the Seal with a Purple Jewel opens the way to Flame Mountain Cavern.

This area is the southern tip of Heartflame Island. One of Mr. Moonlight's art projects can be found here, along with 6 Persimmon Trees and 3 Apple Trees. Come here to collect the fruits during Fall!

A lush, green area just outside of Easter Ruins. There are 7 Persimmon Trees which grow fruit in Fall, and an abundance of Mock Strawberry vines which sprout in Spring. At the raft dock to the northwest end of the map you'll find Mysterious Moss. The moss can be used before planting seeds; it keeps the water moisture of the soil, so you don't have to water crops as often. Once you unlock the raft you can travel to the southwest side of East Lake easily.

These ruins become the Player's home from the start of the game. The ruins are ancient and mysterious, and are also home to the eccentric artist Mr.Moonlight and hermit Franco. On the first floor of the ruins, you'll find a sealed door leading to Easter Ruins Dungeon. Your home is located within the 2nd floor of the ruins, accessible through an elevator. On the top floor of the ruins is your personal farm.

An area southeast of East Lake which connects to the southern Mushroom Forest and the southern East Lake area. It's home to many native flora. A Moonlight-original art project can be found here.

The southern part of Mushroom Forest has various mushrooms available to pick year-round. A special type of mushroom, called Porcini, can be found here after accepting Nana's request.

East Lake's shoreline is home to three Blueberry Trees. In Winter, the lake's surface will freeze over and allow you to explore the area more thoroughly. A Moonlight-original art project can be found here. The Fisherman comes here in Winter to fish out of the ice hole.

The southwestern side of East Lake is home to the Hot Springs, where you can recover Power Points (PP). The Fisherman comes here in Fall.

The western shore is connected to the southwestern side of East Lake. More Olives can be harvested here, and you'll find the Fisherman fishing from the shore in Spring.

A cavern system that can be entered from nearby the Hot Springs. At the very back of the Cavern you'll find a Sealed Door that must be unlocked with a blue jewel. Once the Sealed Door is released, the path to Heartflame Desert will be available. An underground lake can also be accessed in this map. During the Summer, a yellow door will open that leads to the northern part of the island.

A lot of Matsutake grows here in the Fall. (This is the only place where Matsutake can be obtained!) A fallen tree is blocking the path in this map. You can talk to the Hermit of Mermaid Lake to get her to remove the obstruction. As you travel through the path, you'll find an entrance to Flame Mountain Cavern.

An ancient cavern where rare items are hidden away. This cavern connects to Giants Forest and the Cave of Spirits. The Flame Mountain Cavern becomes an important location in the latter half of the main story. A shortcut through the cavern can be unlocked by releasing the Sealed Door with a purple jewel.

After the Sealed Door of East Lake Cavern is opened, you'll arrive in the arid Heartflame Desert. You can only explore this map using the Buggy, so be sure to come here when the Buggy is unlocked. The wild plant native to this area is the Pepino. This area connects to Heartflame Meadow.

This is the home of the Fisherman. In the Dunes you'll find his yurt, as well as a Shine Pod and bed where you can sleep and save your progress. One of Moonlight's art projects is on display here.

A peaceful grassland area between the Desert and Heartflame Plains. Seven Peach Trees line the path to the Plains, which will bear fruit during the Summer. The path to the southeastern shore of Mermaid Lake is also located here.

Heartflame Plains is an expansive map which is home to wild horses and foals. When you are taught how to Whistle, you can befriend and ride the adult horses. In the Summer, the Fisherman will be fishing at the eastern coastline. A Moonlight-original art project is also on display in this area.

The hut belonging to the Hermit of Mermaid Lake sits on a hill overlooking the lake. A number of wild cats roam the area. You can reach Mermaid Lake by following the path beyond the Hermit's Hut.

The area around the lake varies in altitude, but the highest point of the map will always give you a clear look of the Mermaid Tower. The area connects to the northern Mushroom Forest, but the path is a little obscured. Be sure not to miss it.

This section of Mushroom Forest is situated in a warmer climate than its southern counterpart. Because of this, a wider variety of mushrooms are found here year-round. You can find Black Truffles after receiving a request from Sharon.

This map is covered in a dense fog. If you're brave enough to approach the lake from this shoreline, you'll encounter the Mermaid for which the lake is named. The area has a native plant, called Cacao, which can only be found here.

A sprawling, ancient forest spanning the northeastern coast of Heartflame Island. A Giant is said to be slumbering here. A treasure chest hides an important item here, but it can't be opened until the Spirit of the Forest has been freed from its seal.

The imposing Lake Tower was once home to those who worshiped the Spirit of Water. Inside the tower are numerous traps designed to keep intruders out. Be careful while exploring.

This cave leads to the deepest part of Flame Mountain. Inside is an altar dedicated to the Spirit of Fire. The crest of the Spirit of Fire can be obtained here. Because of its proximity to the bottom of Heartflame Volcano, the area is extremely hot!

No-man's-land, abandoned by flora and fauna alike. It's sacred land supervised by the Spirit of Fire, but it's almost impossible for anything to thrive here. You can't use assistant robots, rails, or other Automation on this farm. The only thing here to help you are the various shipping bins scattered around the area. An important story epilogue quest takes place here, so prepare yourself.

Retrieved from "https://ranchstory.miraheze.org/w/index.php?title=Heartflame_Island_(Innocent_Life)&oldid=29935"
Category:
Cookies help us deliver our services. By using our services, you agree to our use of cookies.