From ranchstory
(Redirected from Harvest Moon: Friends of Mineral Town)
Jump to navigationJump to search

Harvest Moon: Friends of Mineral Town (牧場物語 ミネラルタウンのなかまたち, Bokujou Monogatari Mineraru Taun no Nakama-tachi) is the ninth installment in the Harvest Moon series. The protagonist Pete visited the country as a child as his parents believed it would be good for him. However, during the trip, he becomes lost and winds up in Mineral Town on an old man's farm. The old man takes a liking to Pete, and after hearing Pete's father wanted Pete to experience life in the country, arrangements are made and he stays on the farm for a while. He makes a friend with a girl from Mineral Town, and experiences life working (and playing) on the farm. After returning to the city, he exchanges letters with the old man and stays in touch. One day, Pete stops receiving his letters, and concerned for the old man's health, the protagonist visits his farm only to discover that he has passed away six months prior to his arrival. The mayor of Mineral Town, Thomas, requests Pete to take care of the farm for the old man. He happily agrees, thus, starting his new life in the country.

Another version has been released, entitled Harvest Moon: More Friends of Mineral Town where the player has the option to play as the female protagonist, Claire. 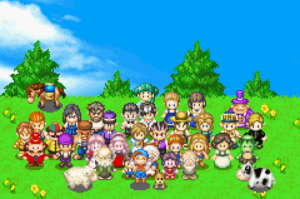 This category has the following 4 subcategories, out of 4 total.

The following 64 pages are in this category, out of 64 total.

Retrieved from "https://ranchstory.miraheze.org/w/index.php?title=Category:Harvest_Moon:_Friends_of_Mineral_Town&oldid=30079"
Categories:
Cookies help us deliver our services. By using our services, you agree to our use of cookies.