Elli moved to Waffle Town from the distant Flower Bud Village. She wanted to learn more techniques in the art of cake-making from the renowned chef, Yolanda, but the Inn was not accepting more workers. As Yolanda is a friend of Elli's grandmother, Elli was allowed to stay with Yolanda rent-free, and is able to learn from Yolanda in a one-on-one environment on days off. Since she couldn't work at the Inn, Elli had to get work elsewhere while on the island. She now works as a clerk in the Town Hall, though there isn't much to do that isn't already being taken care of by Gill. Because of this, Elli is left with a lot of free time. This usually leads to her gossiping with residents that stop by the office. Part of her Town Hall duties include serving as the island's weather forecaster and news reporter. You can see Elli on television by tuning into the morning and evening weather reports. She also hosts the TV show, "Mastery of Beauty".

The Player meets Elli during Hamilton's forced meet-and-greet with the town residents. She misunderstands their initial introduction, thinking that the Player is only a tourist while simultaneously forgetting that they are the new resident here to stay. This mix-up is quickly resolved, and she lets the Player know that she'll help out in any way she can. 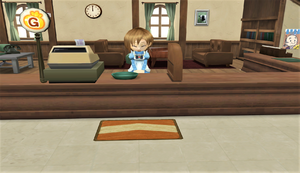 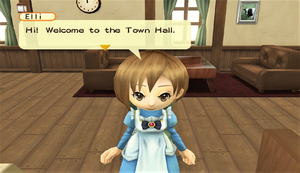 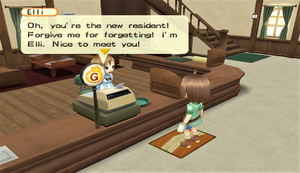 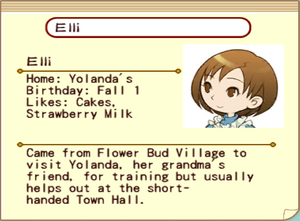 As a nod to her job back in Flower Bud Village, Elli will attend the Fall and Winter Flea Markets as a stall owner. She sells her own handmade sweets and baked goods! The first time the Player enters the Fall Flea Market, Elli will crash into the Player in her hurry to make it to the Town Square on time. 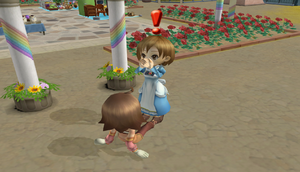 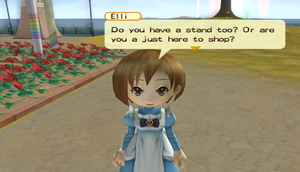 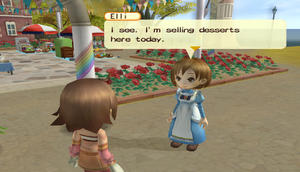 Retrieved from "https://ranchstory.miraheze.org/w/index.php?title=Elli_(Harvest_Moon:_Tree_of_Tranquility)&oldid=17189"
Categories:
Cookies help us deliver our services. By using our services, you agree to our use of cookies.