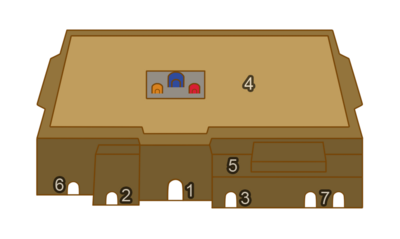 The decaying remains of the Easter Civilization, a society that existed centuries ago on Heartflame Island. The Ruins have been sealed off along with the rest of the island. Dr. Hope bought the Ruins and the land that it rests on at a cheap price, mostly due to the fact that it's sealed off and is largely unusable to the island's residents. He had the site renovated into a workable farm and living space for the Player character. Alongside the Player, two others live here -- Mr. Moonlight and Franco.

Franco's room reflects his humble, hermitic lifestyle. He lives modestly, with only a living room area, a bed, and simple bathroom utilities.

Mr. Moonlight's room is a representation of his artistic preferences. Multiple art projects, usually works-in-progress, are scattered around the room. His bedroom quarters are at the very back of the room.

This is where the Seed Storage and Item Storage are located. The Player's livestock also live on this floor.

This is the Player's living quarters. Everything here has been provided by Dr.Hope. There is a kitchen, a bathroom, and a small living room area included in the room. The elevator sits in the middle of the room, accompanied by the Storage Chute and Pet Elevator. A decently-sized LCD TV is available in the living room area, which lets the Player access different TV channels. Sleeping in the bed will end the current day and allow you to save your progress.

This is the Player's farm, located on the top floor of the ruins. Around the farm are sealed altars which can be unlocked with jewels. Unsealing the altars allows the Player to make use of more farmland.

After unlocking the sealed door with a blue jewel, the Player will unlock a room full of vending machines. This room can connect to Million's store. In Shop A Million 2, the player can interact with the vending machines to purchase items from the main store without having to travel into Volcano Town. The selection of items is mostly the same as the main store, however there are some items which can only be purchased from this location. Please refer to the Shop A Million page for more information.

Once the Orange Sealed Doors are unlocked, a suspicious character called Pink Mask will move into the Easter Ruins. He is a rather shady salesman, and only keeps his store open for a few hours a day. The products he sells are a little dubious. To see the list of store goods, please refer to the full Pink Mask Shop page.

Inside the Red Sealed Door is a treasure room containing various jewels, as well as the Crest of the Water Spirit. It will open once unlocked with a red jewel.

The Blue Sealed Door is located to the left of Franco's room, and is accessible only from the outside of the Ruins.

The Orange Sealed Doors are located to the right of Moonlight's room, and are accessible only from the outside of the Ruins.

The Red Sealed Door is accessible from the first floor of the ruins, located behind the elevator.

Retrieved from "https://ranchstory.miraheze.org/w/index.php?title=Easter_Ruins_(Innocent_Life)&oldid=29994"
Category:
Cookies help us deliver our services. By using our services, you agree to our use of cookies.