A naive, young rancher moves to Waffle Island, only to find out that the land and Goddess which protects it are both dying. What will you do in order to save them?
You, the Player, travel to the island after reading a brochure distributed by the island's Town Mayor. During your time on the island you are mysteriously contacted by a Goddess in your dreams! Continue expanding your farm, tending to animals, and growing amazing crops... before long you'll learn the legend of the Goddess. Meet the Harvest Sprites and sow the seeds of your destiny! Can you restore the Rainbows, rescue the Goddess, and save the island?

During the lifespan of Tree of Tranquility's English localization and release, there were 3 different discs released of the game. The very first edition of the game is a green-colored disc, with quite a few errors on it made during localization and file compiling. This version was pressed and released from September 2008 until April 2009. The other two discs are a second edition Green and full color (featuring the protagonists), respectively. Below are some of the errors you may encounter within the First Edition Green version of Tree of Tranquility. The publishing company, Natsume Co. Ltd., offered players a free return for their first edition copies in exchange for corrected discs back during release. 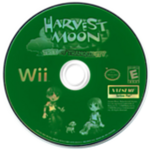 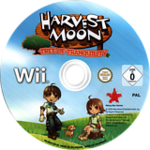 In the First Edition Green version, players playing as Angela will be unable to marry Calvin. This is due to a script load error when triggering his 5-heart event in Ganache Mines. If the player tries to visit him on the 10th floor of the mines for the scene, they will be greeted by Calvin's blank stare and the game (and console) will freeze until manually shut off. Upon a reload, the file is corrupted. This is an unavoidable error, so please do not try to pursue him.
There is speculation that the error may be caused by a mistake in the event script order, as an important main story event involving Calvin takes place in the same spot as his 5-heart event. The theory goes that clearing the story cutscene may allow the player to freely marry Calvin since there are no other scripts taking precedence over his heart event. However, no one has yet to confirm or deny this because of how late in the game the main story event is set.

An unfortunate glitch that can happen is waking up to find your child is missing from the game. It's unknown what causes this to happen, but it can occur at any time. This glitch is not to be mistaken for the Children's random event, "My Missing Child". If your child has disappeared due to this error, the options menu (located from the Diary stand) can help to fix it in most cases. Use the options menu to turn the SFX and Music Volume both to 0, exit from the stand, then go back to the menu and turn the volume back up. Your child should return to normal.
If you track your child while they are invisible, they will be listed in cell area, "None Area Name". This occurs in both the North American and Japanese first versions of the games.

It is completely possible to lock Luke and Bo from the game by activating the cutscene Luke and the Tree Root's sequence of events in the wrong order. There is a giant tree root blocking a path next to the Hilltop Plot (or Hilltop Home if the player chose to live there). It can be cut down through a series of cutscenes involving Luke, Gill, Dale, and Bo. Interacting with the root before meeting Luke, Bo, and Dale will permanently lock both Luke and Bo from meeting the player. You are supposed to meet Dale first, and then meet his apprentices in the forest. If you see Gill's cutscene, upon walking into the Carpentry for the first time you'll be greeted with the second half of the Tree Root event - even though you haven't met Luke or Bo! This causes errors in the script, and stops the event where you meet Luke and Bo in Praline Forest from loading correctly.

If you let your Wiimote disconnect through inactivity (or by some stroke of bad luck it happens to disconnect some other way) it can softlock your game and you will lose progress. After the Wiimote successfully reconnects, your character will be stuck in place, time will not change, and environment like clouds will still be shown to move. This is among the rarest bugs to encounter, but it does happen. If you need to walk away from the game, always remember to pause with the home button.

A demo for Tree of Tranquility was hosted at the 2006 Nintendo World convention. The convention was the world showcase for the Wii, and the Tree of Tranquility panel was able to present a small portion of early gameplay mechanics that highlighted the Wii's newest features (such as motion and IR control) on the showfloor. You can read more here, or briefly view some related images below.

The following 85 pages are in this category, out of 85 total.

Retrieved from "https://ranchstory.miraheze.org/w/index.php?title=Category:Harvest_Moon:_Tree_of_Tranquility&oldid=30772"
Categories:
Cookies help us deliver our services. By using our services, you agree to our use of cookies.