There will be two new main characters, as well as all the bachelors and bachelorettes from Tree of Tranquility returning. The Harvest God (known as the Harvest King in the English version) will make his first real appearance outside of DS Cute. There is also a lion, giraffe, elephant, zebra, hippo, and a lemur in a circus that comes to town once every season.

"A new installment in the popular simulation series, "Bokujou Monogatari", is finally underway! Many new animals are available in this latest work. You will be able to raise many kinds of animals like elephants, lions, hippos, and ostriches. If you become friends with the animals, then you will be well on your way to making a lively farm/ranch. Of course, you can cooperate with the animals in your work, and it will be possible to take them with you. And what's more, like a pet, you will be able to teach the animals tricks! Almost like a circus, you will be able to have fun and play with your animals. Let's gather various animals and enjoy a new farming lifestyle!" - Translation by Nurse Fin

You can marry as well. 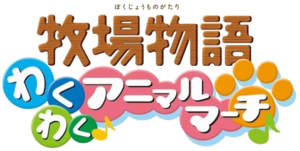 There is a glitch in the game that will cause your children to go missing completely, and besides temporarily returning for Child's Day, permanently. Though some confuse this with the Missing Child events, this does not involve any cutscenes, and when your child is tracked, they are listed in an area called "None Area Name". Though the glitch is known to affect both the American and Japanese versions of the game, at the time of writing. It has been confirmed by a moderator of the Natsume Message Board that the glitch is also found in the European/PAL Version. Fortunately though, the glitch appears to be very rare, with most players never experiencing it, let alone hearing of it. More information can be obtained here, in the Disappearing Child Glitch FAQ Unconfirmed Possible Fix: Turning the Music Volume down to zero in the options menu seems to make the child disappear. Upon turning the music back up, the child will reappear again.

This category has the following 3 subcategories, out of 3 total.

The following 39 pages are in this category, out of 39 total.

Retrieved from "https://ranchstory.miraheze.org/w/index.php?title=Category:Harvest_Moon:_Animal_Parade&oldid=17793"
Categories:
Cookies help us deliver our services. By using our services, you agree to our use of cookies.