The Capeside Bistro is run by Misaki and Blaire. It is located to the right of the Grocery Store, in the lower district of town.

Many Olive Town residents come to the Bistro to eat lunch or dinner. Misaki's menu mainly consists of entrées, so it is recommended to come here for a meal when you want to regain a lot of stamina. Also, like the café, eating some of the meals will inspire you to learn the recipe. The bistro opens a little late, at 12:00 PM, but it's also open until late at night, so it's a good place to visit after a long day of work on the farm! 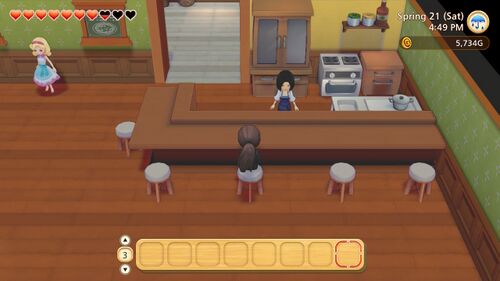 Eating food restores your stamina! The amount of stamina that is recovered by eating entrées is particularly high. However, if you eat an entrée first, you'll become full and won't be able to eat any other dishes. So eat a salad dish first, which raises your maximum stamina, and then have drinks, soup dishes, and finally an entrée, in order like a full course meal! Dessert dishes recover a small amount of stamina, but they can be eaten even on a full stomach, so leave them for last.

Eating dishes marked with ♦ will inspire you to learn the recipe.

All information not credited to persons on this page or below are referenced from the official guide.[1]

Back to the Top
Retrieved from "https://ranchstory.miraheze.org/w/index.php?title=Capeside_Bistro_(Story_of_Seasons:_Pioneers_of_Olive_Town)&oldid=43461"
Categories:
Cookies help us deliver our services. By using our services, you agree to our use of cookies.